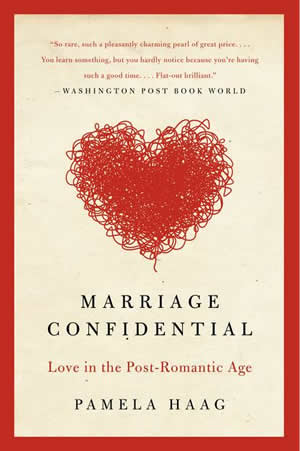 Love in the Post-Romantic Age
by Pamela Haag

• What goes on behind the closed door of a thoroughly modern marriage?

• Is marriage really “becoming obsolete,” as 40 percent of Americans now believe? If so, why?  How did we lose that loving feeling toward marriage?

• In an age when women and men have so many freedoms to define their own lifestyle, why do a fair number of marriages still end up “semi-happy?”

Marriage Confidential has been translated into five languages. Click to View Gallery

Through story, personal reflection, research, survey, and interview, Marriage Confidential takes us inside a world where marriage is more like “friendship;” where  the husbands of “workhorse wives” pursue the having it all dream that wives have long ago been told to abandon; where children have migrated from the children’s table to the emotional center of marriage, defined as a co-parenting arrangement; and where technology, demography, and economy place new stresses on marital monogamy.Exploring the entire gamut of extramarital sex today, Haag even presents a case for how ethical non-monogamy, the revival of mistresses and lovers, might be an option of the future.Haag argues that marriage is neither going obsolete, nor will it survive by a revival of its traditional forms. Marriage will endure in the 21st century through evolution, innovation, imagination and a certain adventuresome, pioneering spirit. The old “marriage imperatives” that forced men and women to march down the aisle are gone, Haag states, and that can’t be undone. Now, marriage needs to find new imperatives, and a new soul. She asserts that we’re moving out of the romantic and into a “post-romantic” age, where couples who get and stay married define marriage more as a friendship, or a co-parenting arrangement, even more than a a lifelong bond of monogamy, emotional fulfillment, or romantic intimacy.

Part cultural commentary, part memoir, part history, and part research, Marriage Confidential takes us on a journey deep inside marriage to consider if the institution has a future, or what kind of future. Haag is a Virgil in the world of post-millennial marriage.