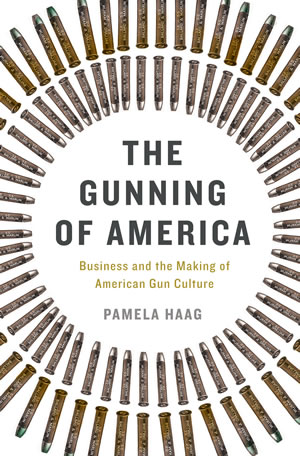 The Gunning of America

Business and the Making of American Gun Culture
by Pamela Haag
Americans have always loved guns. That love was forged early on, with its roots in the Revolution and the Second Amendment. Or so we assume.
It is thought that America is the most heavily civilian-armed nation today because of its “exceptional relationship” to guns. But in truth, American gun culture developed not because the gun was exceptional, but precisely because it was not: it was perceived in crucial years as an unexceptional commodity, whose production and sales followed ordinary business trends.

In The Gunning of America, historian Pamela Haag fundamentally revises the history of guns in the United States, by focusing on the Winchester Repeating Arms Company.

Delving into the obscure archives of the gun industry and setting western myths aside, Haag challenges basic assumptions of how and when America became a gun culture. She shows how gun industrialists worked their sales savvy over the decades to find and create new markets for their product, debunking the idea that guns just “sell themselves.” She reveals how they survived in the 1800s through international sales, and not the on American frontier. And she demonstrates how the mystique of the American gun that we associate with the colonial era actually deepened in the 1900s.

While Oliver Winchester had no apparent qualms about his life’s work of arming America, his daughter-in-law Sarah Winchester was a different story. Legend holds that Sarah was haunted by what she considered a vast blood fortune, and became convinced that the ghosts of rifle victims had cursed her. She channeled much of her inheritance, and her conflicted conscience, into a monstrous estate now known as the Winchester Mystery House—at its height, the most bizarre private residence in the world.

In this revelatory and exciting narrative, Haag upends our traditional understanding of the American gun culture. In so doing, she explodes the clichés of our stalemated gun politics today.