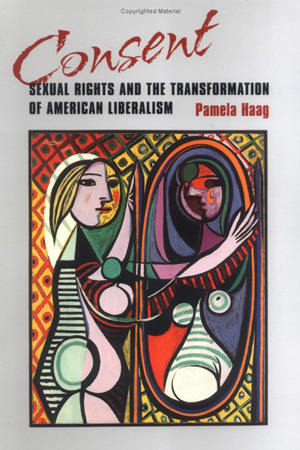 We think of the right to privacy as a legal invention and construct—which it is—but I argue that decades before the signal Griswald and Roe rulings that recognized this constitutional right, American culture changed, and had to change, in ways that would shift our concept of what it means to be a free American citizen. Without these cultural transformations, the modern liberal idea of the right to privacy could not take root.

In the 1800s, and under a classic liberal view, American freedom was defined by the labor market and economic contracts. This was the laissez-faire view of individual liberty, and one that Ron Paul, for example, would like to see revived today. But by the early 1900s, the idea of what it meant to be a free citizen was shifting from a classic liberal to a modern liberal stance, the domain of privacy and sovereignty shifting from economic relations to personal, sexual, and marital relations. The modern liberal view of individual liberty is defined as a “right to privacy” in these relations, and not economic relations.

This shift from a classic liberal to a modern liberal understanding of the “right to be left alone” involved changes in key concepts of sexual consent, the meaning of sexual coercion and violence, and the meaning of personal self-determination and agency. This happened through discourses on seduction, white slavery, arranged marriages, rape, and more affirmative discourses of romantic love and sexual free choice.

I talk about all of those discourses and developments in Consent.

“With the publication of this book, no worthwhile discussion of the history of heterosexuality, sexual violence or consent can occur without drawing on Pamela Haag’s arguments, which recast these topics in new terms. Her juxtapositions of political and sexual ideologies are breathtaking. She also provides a significant challenge to conventional treatments of American liberalism and individualism.”

“The variety of evidence that Pamela Haag brings to this project—including the records of seduction trials, the works of liberal theorists, and popular fiction—is dazzling.”
-Regina Kunzel, author of Fallen Women, Problem Girls